Rankings are subjective – especially when it comes to SEC biases.

But no region matches the atmosphere and grandeur as fall Saturdays in SEC country. From tailgating to on-field action, football comes alive on all 14 college campuses.

There is no right or wrong answer to stadium rankings, and each town has its own unique characteristics to offer. Given the hyper-completive nature between the schools, it’s only natural fans will debate the ins and outs of everything, from who will be playing in Georgia come December to who has the loudest fans.

These rankings encompass everything including fan support, tailgate scene and general atmosphere.

Holding around 100,000 – it can be argued that there isn’t an atmosphere that compares to a night game at Tiger Stadium. The Louisiana-influenced food makes for a delicious tailgate. At its height, it can be one of the loudest and intense atmospheres in all of college football. Most SEC-fans will agree Tiger Stadium is a must-see event. 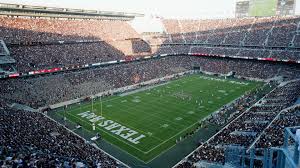 Relatively new to SEC culture, Texas A&M has had no problem fitting in. Located in arguably the No. 1 state for amateur football, Kyle Field is currently undergoing renovations to boost it up towards one of the premiere venues in the U.S. As A&M continues to establish itself in the SEC West, the stadium atmosphere should continue to intensify. It is the oldest stadium of them all and holds one of the richest traditions to experience.

Located along the Tennessee River, Neyland Stadium is one of the largest stadiums in college or pro football. Nobody else has a tradition quite like the Volunteer Navy and traveling to the stadium on boat. With an updated brick exterior, Neyland now has a quality looking outside to match the overpowering environment on the inside. Wether you love or hate that shade of orange, be prepared to see a lot of it. 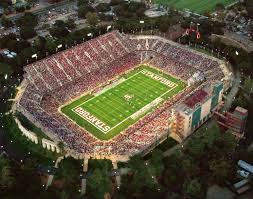 Between the hedges, the aesthetics of Stanford and surrounding Athens, Ga creates one of the most alluring environments the SEC has to offer. Not to mention, it offers a home-field advantage the can make Georgia one of the most difficult teams to beat across the country.

In front of maybe the most dedicated fans in the nation, Bryant-Denny stadium is the power source for Alabama’s recent success. Head coach Nick Saban is 43-6 at home, and along with in-state rival Auburn, has dominated the SEC and college football this decade. The allure of the stadium is also helped from its naming, in part, after one of college football’s all-time greatest coaches: Paul Bear Bryant.

The stadium – named after Shug Jordan, the winningest coach in school history, and Cliff Hare, a member of Auburn’s first-ever football team – has plenty of character that makes it stand out in the SEC landscape. From Toomer’s Corner to the ‘War Eagle’ flowers in the end zone, it offers a great experience that every SEC fan must see once. Nothing compares to the team’s live Golden Eagle mascot takes flight before kickoff.

Ben-Hill Griffen Stadium is more commonly known as ‘The Swamp’ and is one of the more intimidating places to play a college football game. All-time great and famous Gator Steve Spurrier gave it the nickname in the 1990s. There also isn’t a hotter venue in the SEC come mid-August (which opposing teams and fans might not enjoy). The unique design lends to the home-field advantage, and be prepared to put up with the ‘Gator Chomp.’