Rankings are subjective – especially when it comes to SEC biases.

But no region matches the atmosphere and grandeur as fall Saturdays in SEC country. From tailgating to on-field action, football comes alive on all 14 college campuses.

There is no right or wrong answer to stadium rankings, and each town has its own unique characteristics to offer. The lower-teired stadiums might not have the 80,000-plus grandeur of the top of the SEC. But they still hold their own with the rest of the country and are definitely worth a visit for any SEC fan.

These rankings encompass everything including fan support, tailgate scene and general atmosphere.

With Steve Spurrier’s revival of the program, Williams-Brice Stadium’s improved atmosphere has followed. The coach, who brought USC its first 10-win season, also has created an environment incredibly difficult for opposing teams to win. Spurrier has posted an 84-45 record, the most wins for a coach at the school. With his success, the school has upgraded the stadium and surrounding tailgate areas for Saturdays.

Ole Miss has built its program into a dark-horse contender in the hyper-competitive SEC West – making the on-field entertainment worth a visit. But hands down, the No. 1 must-see experience is The Grove, which might arguably be the best place to tailgate on Saturdays. The stadium itself is on the smaller side but is one of the oldest venues in the SEC.

Bret Bielema’s arrival has stabilized the turmoil after Bobby Petrino’s exit. This year, Arkansas could be a team overlooked and  tough win. Bielema has built a team with cornerstones off tough, physical and blue-collar football. The stadium holds the second-largest video board in college football installed in 2013, and more renovations are scheduled. Just be prepared to hear, “Woo Pig Sooie!” a little more than you’d probably prefer.

When Missouri joined the conference, several SEC East fans didn’t think they would be able to contend and be a serious threat. Little did they know, Missouri would win the East both years they were in the Conference. Whether they’ll make it three-in-a-row, we will find out. But Missouri has answered the question and proven they can contend with anybody in the conference. They’ve also scheduled renovations to Memorial Stadium to start bringing it on par with the other SEC stadiums. 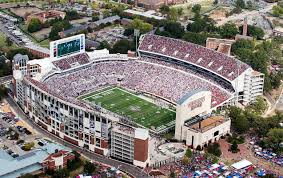 Dan Mullin has given the school a reason to keep expanding and adding on to the stadium. And if they can replicate and improve on a season like last year, the capacity will continue to grow. The piercing cowbells set it apart from any other stadium in the country. And they make opposing teams and fans uncomfortable (to say the least) when attending Davis Wade Stadium.

Mark Stoops has plenty of work to do in his second season. Despite a lack of success, Kentucky fans still give a pretty decent average turnout each year. And they can fill the stadium’s 67,000 capacity in better years. The only thing going against the football stadium is it isn’t the basketball arena.

There is a reason this stadium is last. Derek Mason will have to stop the bleeding after a tumultuous first year. Ex-coach James Franklin started building momentum after back-to-back winning seasons, but he bolted for the opening at Penn State. Vandy will always have a difficult time competing with other SEC school’s attendance numbers. Being located in Nashville adds a unique game-day experience with plenty to do within walking distance.